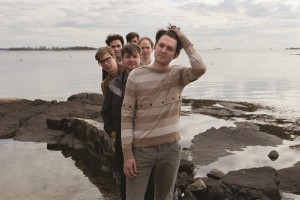 The album’s opener “Candle’s Fire” is a familiar, welcoming introduction (though more calculated and even-toned in even its most boisterous moments) while “Santa Fe,” an ode to his hometown, introduces an electronic presence that he’s toyed with in side projects and given us a glimpse of in the Realpeople Holland recording. Then there’s “East Harlem” the old/new leaked single that beautifully weaves his lyrics with the brass to demonstrates discipline, as the band holds back more than we’ve seen in the past to keep an even tempo that unravels into a playful, lingering outro. “The Rip Tide” showcases all of the elements of Beirut’s musical melting pot – Condon’s lyrical whimsy, slight electronic presence, and beautiful orchestrations. It’s clear that Beirut’s time “off” (read: touring and writing new songs) allowed time for Condon and his band to fine tune their collective talents, which has clearly led to the production of a refined, rejuvenated sound. 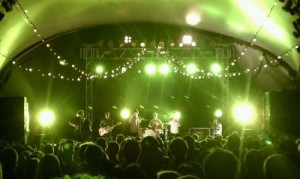 The crowd packed in closer to the stage as Condon stepped to the mic empty handed and Beirut launched into “The Concubine.” He picked up his ukulele for the “Elephant Gun” and casually tossed it over his shoulder to alternate between uke and vocals and second trumpet. The sound was full and romantic as the crowd swayed along to the jubilant The Flying Club Cup single. 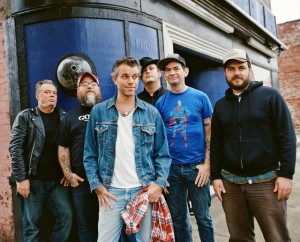 The alt-country/punk/Southern-rock ensemble powered through a two-hour set that mixed songs from their twelve years together, including “Nights Like These,” “That Much Further West,” and “Can’t Feel A Thing.” The overwhelming feeling of their casual performance is certainly a comforting blue collar and familial tone – a representation in the vein of Springsteen’s everyman. The chemistry between Lucero and their fans is almost as engaging as their music. This is a band that knows their audience, and nods to Texas, particularly Austin, were emphasized by the lyrical shout-outs in “Hey Darlin’ Do You Gamble” and “Raising Hell.”

Within a few songs Carney lost his thick-black rimmed glasses, broke numerous drumsticks and showed off some impressive musically-induced face distortion as he relentlessly hammered away. Auerbach similarly drifts into a zone of his own. His eyes glaze over, his head shakes as he moves around on stage and his vocals are laced with an intangible raw emotion. Watching them feed off of one another is revealing of their unwavering musical chemistry. These Akron, Ohio boys have been playing together since childhood and they know exactly what they’re doing. 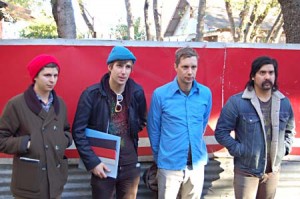 While flashing his camera phone incessantly, I overheard a neighboring fan inquire if “the guy on keyboard” is “that dude from [some random] movie.” Not quite — that’s Ryan Kattner (better known as Honus Honus of Man Man). Honus and Nick “Diamond” Thornburn (Islands and formerly Unicorns) trade off as duel lead vocalists. Together they meld the distinct sounds of Islands and Man Man into an unique brand of “doom-wop.” The two balance one another out in the perfect combination — Diamond is the dreamy lead guitarist to Honus Honus’ darker, manic growls and jangly, hammering keyboard instrumentals. All the while Joe Plummer (The Shins and Modest Mouse) steadily keeps the beat as Cera, aside from his ice-breaking joke (“Anyone here from Austin?”), remained focused on his new role as bassist. 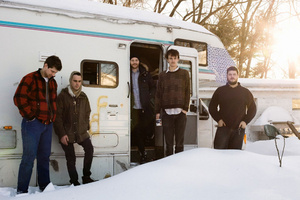 The Felice Brothers’ latest release, last year’s Yonder The Clock demonstrates their heavy lyrical content laced with tales of hard women, drunkenness, incarceration, brothels and barroom bets. Their spirit may sound battered, but never broken. In a mere five years The Felice Brothers have come up from backyards and NYC subway performances to world tours. Their hustling has served them well. They’ve released seven albums, appeared at The Newport Folk Festival and toured with Conor Oberst, The Drive-By Truckers, Deer Tick and now, Adam Haworth Stephens.